The Game • Playing IF • Help • Acknowledgements

If you bought Hadean Lands on Steam, play it on Steam. Easy.

If you bought the game on Itch.IO or the Humble Store, you have downloaded a package which contains a Windows installer, a Mac disk image, or a Linux zip file. Unpack that.

To play the game on iPhone/iPad, buy the Hadean Lands app on Apple's App Store.

If you played the first (2014) release of Hadean Lands, please note that save-game files cannot be exchanged between that version and this one. Sorry!

(Save files can be exchanged between the Steam Hadean Lands app, the Itch/Humble download versions, and Gargoyle — as long as you are playing the same version of the game.)

How to Play Interactive Fiction

In this game, you are the center of a story. You will type commands in simple English; the game will respond, and tell you what happens. Here is a sample transcript of a game session. (No spoilers!)

The game will start by asking you, “Have you played interactive fiction before?” If you answer “no,” the first room will run as a tutorial. The game will lead you through basic IF commands and your first alchemical recipe.

If you answer “yes,” the game will allow you to solve the first room on your own. (And all the rest of the rooms, too.)

Even if you’re familiar with IF, take a look at the Performing Alchemy section. This game has some special commands which you should take note of.

The simplest IF commands are usually one or two words:

But sometimes you need more:

In a more complicated scene, you might have to get more specific:

You will almost always be dealing with concrete things that you see in the game world. Work with what you see around you. If you try wild abstractions like “GO SEE A MOVIE” or “RUN FOR PRESIDENT”, the game will probably not understand you.

Here’s a handy reference card which shows the most common IF commands. It's also available within the game, from the “IF Reference Card” menu option. 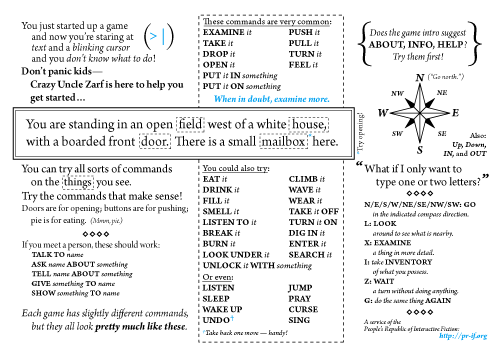 (Click for PDF version of the card. More versions and translations available at the People’s Republic of Interactive Fiction. Print ’em out and pass ’em around. Card text by Andrew Plotkin; design by Lea Albaugh; licensed CC BY-SA.)

If you are completely at sea, you can always try these commands:

Because these actions are so common, they have one-letter abbreviations: “L”, “I”, and “X”.

Again, your actions should focus on the objects and exits that you see in the game world.

Moving around the world

The game world is divided into locations — usually called “rooms”, although they might be indoors or outdoors. A room is everything you can see at one time, and everything you can conveniently reach. Don’t worry about crossing the room, turning around, or standing near things; that sort of movement is automatic.

In this game you can go directly to any room or object that you know about:

You’ll automatically unlock and open any doors needed to reach your destination.

Go directly to the last room that you were in. This works even after a long “GO TO...” journey.

You’re probably staring at your dictionary and shuddering in terror (or anticipation!) of the infinite possibilities. Sometimes IF works that way. More often, you’ll run through a small list of common commands — some of which you’ve already seen.

Hadean Lands supports several commands which are specific to life on an alchemical starship.

You can go directly to any room or object that you know about. You can also “GO BACK” to the last location you were in.

Speaking incantations is one of the fundamental skills of a ritualist. Try “RECALL FORMULAS” to list the formulas that you have learned.

You can only use these commands after you have successfully completed the ritual at least once! In other words, the first time you do a ritual, you must follow the step-by-step instructions. After that, you can use the “PERFORM” and “CREATE” shortcuts.

You generally cannot create two of anything. If something already exists, “CREATE” will merely tell you where it is. (You could also try “RECALL” or “GO TO”.)

Early in the game, you will discover a way to return to the beginning, while still remembering everything you’ve learned. Type “RESET” to do this from anywhere in the game.

Once you have solved any puzzle successfully, you can solve it again with a single command. For example, the first time you encounter a locked door, you’ll have to go find the key and bring it back. But the second time, you can just type “OPEN DOOR”. The game will automatically go to the key, fetch it, return to the door, and unlock it.

In fact, if you “GO TO” a room beyond the door — or click it on the in-game map — the game will do the same thing. Travelling there may involve several steps, but the game automates all of them. If a ritual is required to reach the key, the game will automatically do that too. And it works the other way: when you “PERFORM” a ritual, the game will go fetch the ingredients.

Of course, if you’ve thrown the key down a bottomless pit, you can’t unlock the door. You can’t “PERFORM” a ritual if one of the crucial ingredients has been used up in an earlier ritual.

(The Hadean Lands app autosaves your position. When you launch the app you’ll be where you left off. But if you want to transfer progress from one computer to another, use the “SAVE” command. Really, I recommend using it occasionally, just in case.)

These are handy, but not as flexible as “RESTORE” and “SAVE”. Note that you have to type “RESTART COMPLETELY” to really start the game over. (This is different from “RESET”.)

A transcript is a text log of your game.

(In the iOS app, to see the list of saved transcripts, switch to the Journal tab and tap the Transcripts button.)